In times when millions of people are forced to leave their homes to escape violence and destruction and most of us probably carry on with our lives, there are some people who show quiet and inspiring acts of compassion and kindness. We would like to share a unique story of a former client of ours who has given a young man from Ghana an opportunity for a better life.

We know you lived in Valencia for a couple years and then in 2020 you decided to move out from the city. Would you say it was the right decision for you? What were the main reasons and how was the adapting again to a new and more remote place?

At this point in my life, age 70, having moved to Valencia on basically a whim, I consider myself an explorer more than a settler. I did not move to Spain looking for a new “home” really but for new experiences so moving is really no big deal. I absolutely love Valencia and loved living there. I met so many interesting and open people who I am still in contact with and have become great friends. Here on the outskirts of Denia with easy access to great hiking and the sea it is a whole different experience. I have lived most of my life in what would be considered remote places, the forests and farmlands about an hour or two from New York City so living here though a bit remote  is really very familiar to me. Valencia is only a 90 minute bus ride. As far as adapting, I choose to live with my eyes and heart open, trying my best to be fully present which I believe is all the adapting that is needed.

Living on your own can be challenging sometimes but we know you soon made some friends and hike buddies.

The most exciting and challenging experience probably was to open your house to someone who is in need. Now with the war in Ukraine many of locals and expats are hosting refugees which is honourable thing to do but you started to help someone much more before that.

Can you tell us how did you meet the young man Osei* from Ghana?

When I first found myself living alone about six years ago, it was a little challenging for the first few minutes lol. I am actually very happy living alone and prefer it now, I enjoy getting out in nature on long hikes. I have hiked the Appalachian Trail in the US, more than 2,000 miles alone much of the time. I  also enjoy long walks around the city or parks (can’t beat Valencia for that), reading and playing music and the beach of course. Friends are also important to me. I have adult children who I am very close to, 2 granddaughters, my Dad, brothers and family and lots of great friends back in the US where I still maintain a home, though I am not there very much at all.

In Valencia, about twice per week I attended a program at UPV called the American Space which is a cultural exchange program to share American culture with students and the general public in Valencia. So the participants are mostly Valencian A few of the people I met there started making hiking and touring excursions outside the city together.  One day, the American Space was part of a program at the Sankofa Intercultural Space in Valencia.  It was an exchange between irregular immigrants from Africa who had recently been admitted to Spain from the rescue boat the Aquarius and some folks from the American Space program. The Aquarius boat story was big news in the media at the time. We were matched with a partner and the idea was to share our life experiences together. My partner was a young man, age 25, from Sierra Leone whose story left me speechless and pretty much in tears. I could hardly speak when it came time to share my story of such privilege with him. And to be sure, my background is just from growing up in a working class family in the US and my work as a musician and professor, not exactly “pijo”**.  Another young man from Ghana, age 18, was partnered with one of my friends from the excursion group. The following weekend on a trip to Alicante my friend told me that he had invited him to join us. We had met briefly at the program. And so he became a part of our little group of 5. He is now living with me.

What was his situation and how did you decide that something had to be done and that you are the one who actually can help?

So this question makes me smile, asked this way it makes it so easy to say “not my problem”. The way  I looked at it is that my relationship with this young man is not something that I sought out but rather was just presented to me and the way I asked myself this question is how do I not see that something needs to be done and how do I not help. What kind of person would I be after knowing his story and sharing experiences together as “excursionistas”***  to just wish him good luck and not share what I could, both in the way of guidance and financial assistance. I don’t really look at this at all like I am doing some really good thing, but rather something that I am obligated to do by the values I profess to have, otherwise what kind of hypocrite would I be. And although the concept of obligation is often viewed in a negative way by many, a true obligation is a very good thing. So we can of course look at this totality of me offering assistance as something good that is happening but the goodness is not initiated by me, but rather a reflection of the reality of the goodness of creation. My young friend was forced to stop his schooling at about age ten because of curfews put in place by warlords. He left his home at age 14 because of tribal killings where he lived. His uncle and a neighbour were both murdered. His mother so feared for his life that she sent him away with a neighbour who was also leaving because of the killings. He wondered around the Middle East and northern Africa, the neighbour he was with just disappeared one day probably murdered or kidnapped and he ended up here in Spain by chance, after his boat nearly sank during a storm in  the Mediterranean.  How was he prepared for getting a job and building a life here?  His main strengths though are his kindness, his extreme intelligence, his discipline, and his deep spirituality which are a lot to build on.

How long has Osei lived with you and how you would describe the daily life?

We have been living together for one year now. He needs to have a marketable job skill. I asked him what he would really like to do in life and he wants to do computer coding. So he now has a laptop and is taking courses online. He has completed a 6 unit Python course presented by Google and is currently taking a University of Michigan computer science course on Coursera. All are certified courses. Our deal is that he takes these studies as if they were a job, so he works all day on the computer. Of course we take time to go out and do things occasionally, a hike or the morning at the beach. We eat together every afternoon and discuss his work and mine. We try to speak Spanish around the house as much as possible so this helps me to learn. When he completes this current course, we have another one lined up. My son is a computer science professional and when he feels my friend is ready, we will sign up for a computer coding boot camp which should assure him of a job.

We know that Spanish bureaucracy can be close to a nightmare. The legal part must be challenging. How Osei can become legal in Spain and what struggles have you faced?

Well right now, the legal part is so challenging that we have just stopped pursuing it and are just focusing on getting that education. In Spain’s defence, there are several options available to immigrants but all of them involve working which makes sense. And we are focusing on education. I have checked with my lawyer and several other professionals in the field here and there are really no options in our unique situation. Once he has his job skills in place and possibly a job offer we will then focus on the residency situation. There is also the possibility that Spain will offer an easier option as some things are in process. It is a very complicated situation involving Valencia, Madrid and the EU that all need to be on the same page. We are hopeful.

You are definitely helping to achieve this young man a brighter future, which must not be easy for you or him. What are your main conclusions when doing such an inspiring thing and taking someone you met in your home and life? This must mean so much to you and even more to him.

It definitely means a lot to both of us. My main conclusion is find your heart, don’t be afraid of it, follow where it leads. Love one another.

We also heard that Osei is not the only one you help. Can you tell us more?

I also help a young man from Colombia, who is also 22. I started out helping him when he was about 15 and  having some problems at home. Working with his mother and his foster grandparents and him, they had given up on him as he was basically on a self destruct mission because of some real issues in his life. Luckily for him, l being a musician from NY, self destruct missions were nothing new to me. But he has managed to turn his life completely around and  is currently finishing up his 3rd year of a 5 year program as a psychology  major at a private University in Cali Columbia and will be coming this September to Alicante to study for one year in an exchange program at Universidad Miguel Hernandez in Elche. I am happy that we will be able to share some time together with the University being relatively near to Denia. I am most happy at his progress in life. I am happy to have been able to help make this happen for him.

What were the main reasons you decided that you should jump in and actually help?

Already discussed above too. But I don’t know. It really didn’t feel like a decision or too much to think about with either of my young friends. I wasn’t out walking around looking for this. But rather these kids were just placed in my life and I was aware enough to see it. And then if you see it,  you have to do something, and really I mean you have to. There is no decision process, you just do what is needed. But I think the process needs to begin by looking inward and not outward, spending quiet time with Allah, God, the Universe, Creation or whatever you call that one great force that is everything. And then we just simply follow along the way. 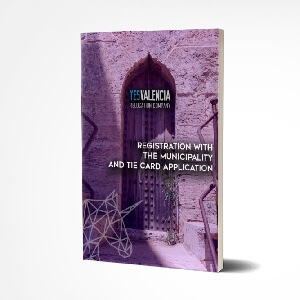 Registration with the Municipality and TIE Card Application

We do not simply look for houses; we find outstanding homes.